One of my fellow suburban warriors gets a light in his eye when he finds the much-fabled “something to look forward to.” The bad grammar aside, it’s a suburban warrior’s second reason for getting up in the morning. He first gets up to make sure his family members still love him as much as he loves them. After that, it’s scrounging around in the yearly planner for a time in which he knows he will have fun.

Today, I start a massive work project that will keep me from doing anything fun for more than two weeks. It’s the price I pay for being able to work in my underwear and a backward ball cap all the time (like right now!). With that in mind, and to keep me sane for the next few weeks, here’s a list of my elusive “look forward to” moments for the rest of the year.

The Bash–The weekend after I finish this project, fellow suburban warrior BadBlood and I are headed up to the Philly-area for a yearly charity party with a few hundred other like-minded people. I haven’t been in a few years and have missed out on the fun because of the same work project. This year, the dates work out and I get to go. Plane tickets have been booked. Sleeping arrangements still remain a matter of…well, actually booking them. Join me there? 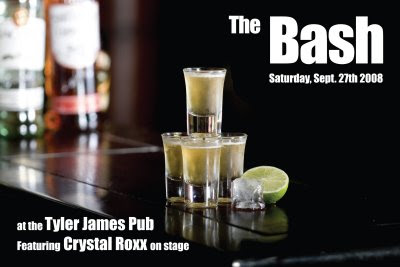 Yonder–Three days after getting back from the Bash, my wife and I have tickets to go see Yonder Mountain String Band. I’ve wanted to see this band live for years and this will be my first opportunity. They are playing a show at the Handlebar, one of my favorite live music venues in the area. We’ll be joined by four of our closest friends, not to mention what is sure to be a sell-out crowd.

LEAF–A couple of weeks later, my wife and I will get our one weekend out of the year when we get to relax with no responsibilities at all. LEAF is a small-ish music festival (5,000 people or so) that features some great acts and lets us camp by a lake with great friends for four days. I’m most excited this year to see Donna the Buffalo (for the umpteenth time), Robert Earl Keen (for the first time), and The Legendary JCs. The schedule at LEAF generally offers a couple bands I wanna see and a lot of bands I’ve never heard before. I always walk out with a new band I love. Some of my most memorable shows at LEAF: Eddie from Ohio, Donna the Buffalo, Billy Joe Shaver, Richie Havens, and Fishbone (yeah, I didn’t expect that one either). LEAF is the perfect place to get your head together…for those of you who need such a thing.

MIZ…–The next week, my wife and I will hop in our family roadster and travel to Missouri to visit my family. While there, we’re going to ride up to Columbia with my brother and sister in-law to hang with a lot of lifelong friends we haven’t seen in a while. While there, we’re going to Mizzou’s homecoming game. For once, I may get to see the Tigers play some great football.

Halloween–Having the boy has reinvigorated my interest in Halloween. Although I haven’t discussed it with the wife yet, I figure this might be our first trick or treating year. The boy wants to be Wolverine. Or at least, that’s the costume he’s picked out. The violence involved with being Wolverine, however, is not really in line with my boy’s personality, so that might change.

November–I’m trying to pretend November doesn’t exist. It will require a short work trip to finish off what I started this summer. Let’s just forget about that part.

Vegas–This year will mark the fifth birthday of the Vegas trip that sort of kicked off this whole new life for me. While my attendance is not 100% yet, if I miss it I will be really disappointed.